69 miles/ 1,555 total  Just me. Started riding about 8:30  a.m. and arrived as it was getting dark, about 7:30 p.m.  A power line over the hiker/ biker area had arced.   The power company, fire department and park officials were there, and the dozen cyclists who were set up had to move their tents to a new area.  I was fortunate that I just arrived- and it felt good to see 7 or 8 of the cyclists I’ve seen many times along the way.

I rode the Sonoma Coast today.  High.  Steep sides, sloping to the ocean.  Beautiful and tense.  I was on full-concentration all of the time on that road, and I was glad to finish the descent into Jenner.

Two years ago I visited Emily and Aaron in Walnut Creek, outside of San Francisco, and we drove north along the coast to Jenner and then turned inland to Healdsburg and Santa Rosa. Today I arrived, on bicycle, to the area we had explored.  I remember seeing MANY cyclists on this road two years ago, mostly serious-looking cyclists on training rides. And I saw many today, for the first time in California.

At Jenner I spoke with Jack, who noticed my three juggling clubs and said, “You never know when you’re going to need to juggle.”  He was a 22 yo starting a voyage of discovery in an automobile and he was interested enough in my trip to take one of my cards. 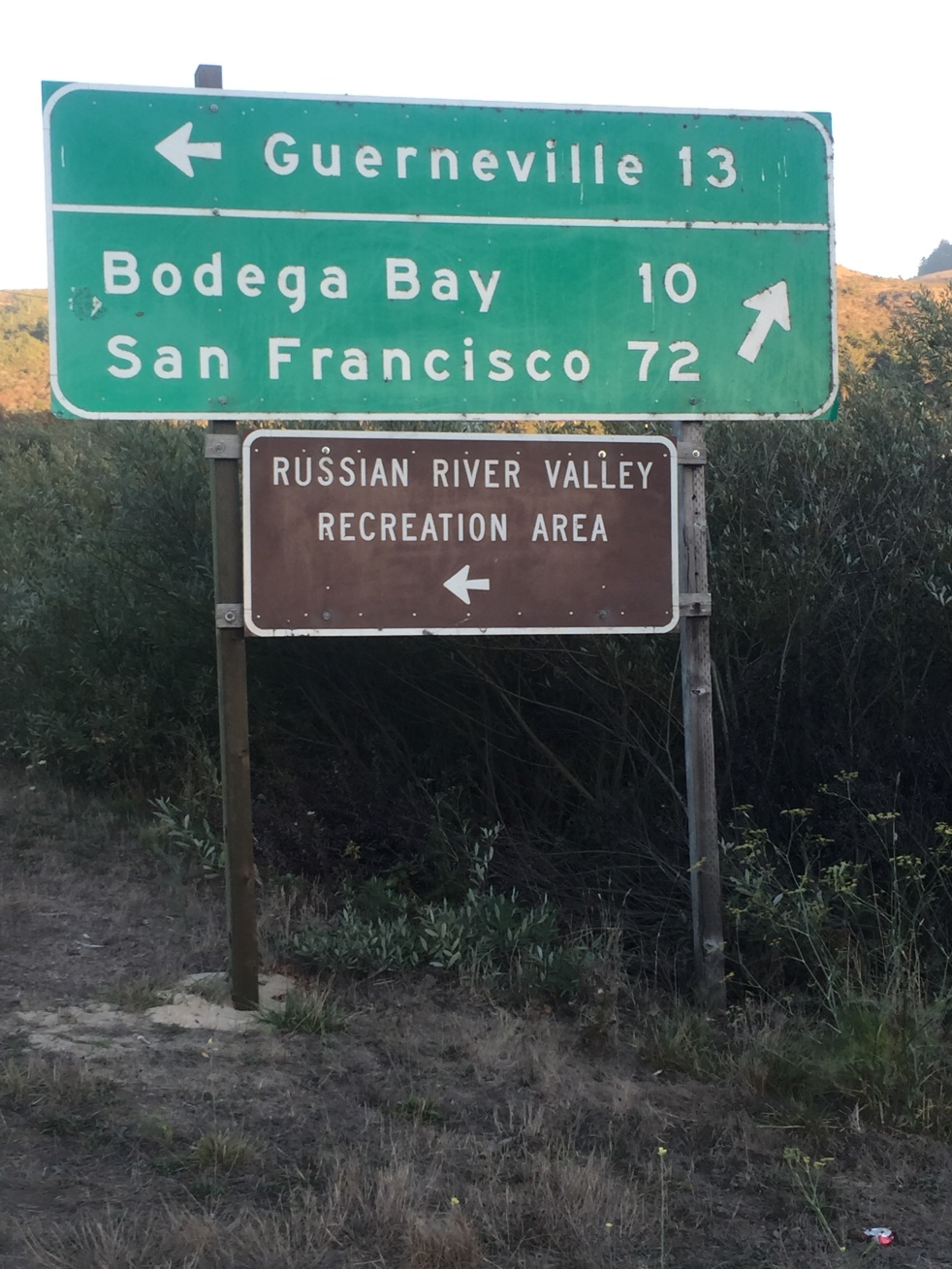 73 miles/ 1,628 total  Just me.  I started the day in drizzles, which makes think mostly about getting off the bike.  The drizzle became a hard rain and I pulled off the road, parked under a tree, put on my fleece jacket and waited only ten minutes for it to stop. 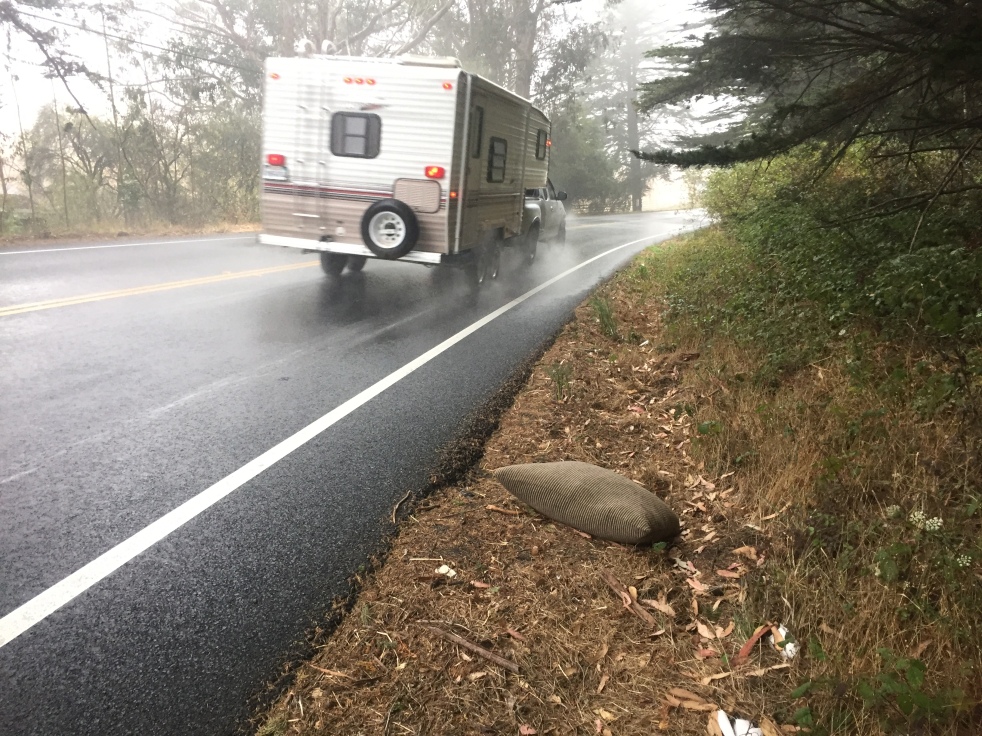 I moved on, hopeful, and the sky slowly lightened until it was full sunshine in the afternoon.

I ate biscuits and gravy and greens…and a milk shake in Valley Ford.  I could feel the SF influence- in the menu, quality of the food and in the customers.  As a man left, he handed the cook $10 and said, “Thank you.  That was excellent.”  I don’t think that is happening in Myers Flat or Miranda or Rio Dell.

About 3 p.m. I had half of a BLT at the grocery store/ deli in Lagunitas.  Anders, who was riding about an hour ahead of me, sent  a text recommending it. I checked Google and was surprised to find that the Golden Gate Bridge was only 22 miles away.  I knew I could make it before dark.

Cathay, from Ireland, who said that if I come to Ireland he’ll help me fulfill my dream of joining a sing-along in an Irish pub (I know my singing is questionable, but after two beers I can have a LOT of fun.)

There was a significant climb as I headed toward the towns  (insert names here)  on the way to SF and I saw more and more cyclists out for training rides.  Many blew past me and said nothing.  I like the ones who have some form of a “We are brothers in cycling” greeting.  Like “Hello.” Or “Beautiful day!”

I was armed with the Adventure Cycling map of the safest route for cyclists to get to the Golden Gate Bridge.  I stopped often to recheck the map, was greatly aided by the green “Bicycle Route” signs,  and I  approached cyclists several times to confirm that I was on the right track.  Those were good calls.

I never got lost, and the roads and a trail were quite comfortable, but I was moving slowly.  Ride. Check  map.  Ride. Confirm route with a cyclist. Take a picture.  Check map. Double-check with Google. Take a picture.

After 6 p.m. I was in Sausalito and approaching the bridge.  I didn’t know the bridge crossing etiquette for cyclists and stopped a cycling couple from Denmark, who were very helpful.  They just came over the bridge and were quite nonchalant about it.

At the approach to the Golden Gate Bridge

I climbed the last hill to the bridge and a smiling 20-something on a bike  confirmed that I needed to go under the bridge, via the stairs, because cyclists ride on the west side of the bridge at this time of day.

Crossing under the Golden Gate Bridge

Oct. 2, 3 and 4- Stayed overnight in San Francisco at the home of Bob and Lisa Mayer

Stayed overnight at the home of Julie Buckley and Eric Fung in Los Altos.

Oct. 6- Hopped a train back to San Francisco and went to the Lumineers concert, at Berkeley, with Emily and Aaron!

Slept in Lafayatte, near Oakland, with Emily and Aaron’s friend, Krista.

Oct. 7- Emily and Aaron drove me back to Los Altos, where I grabbed my bike and panniers, then on to San Jose.  I rode a bus from San Jose to Monterey, to meet Brian Smallwood.

Slept at Veterans’ Campground in Monterey.

Oct. 8- Monterey, around the 17 Mile Drive, and to Big Sur Campground.  Brian Smallwood and me. 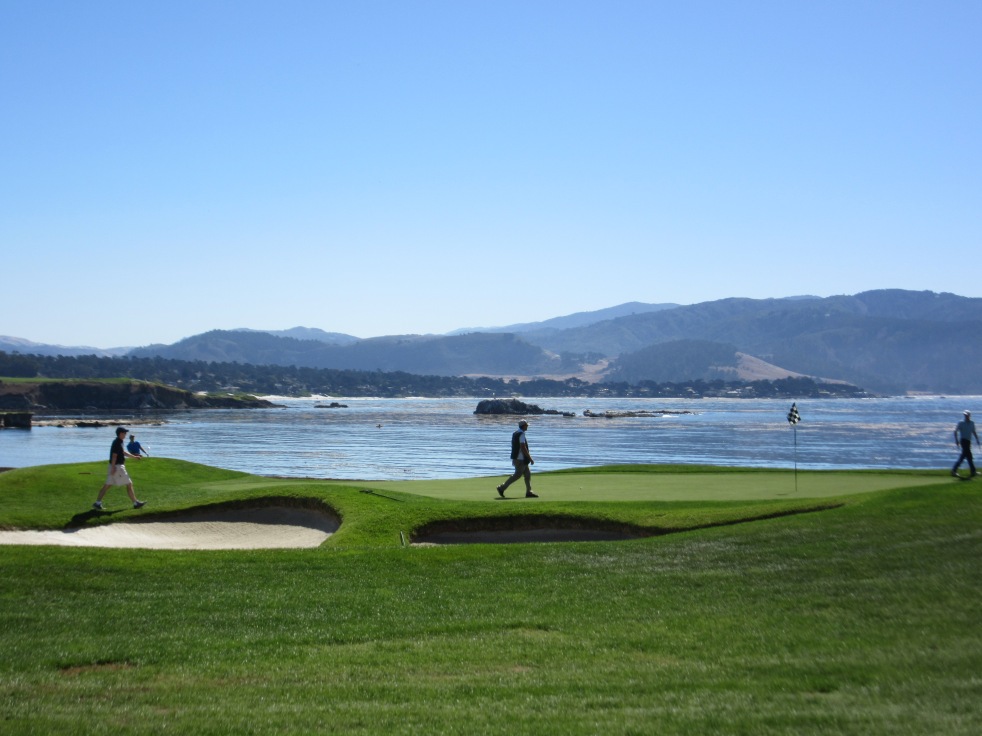 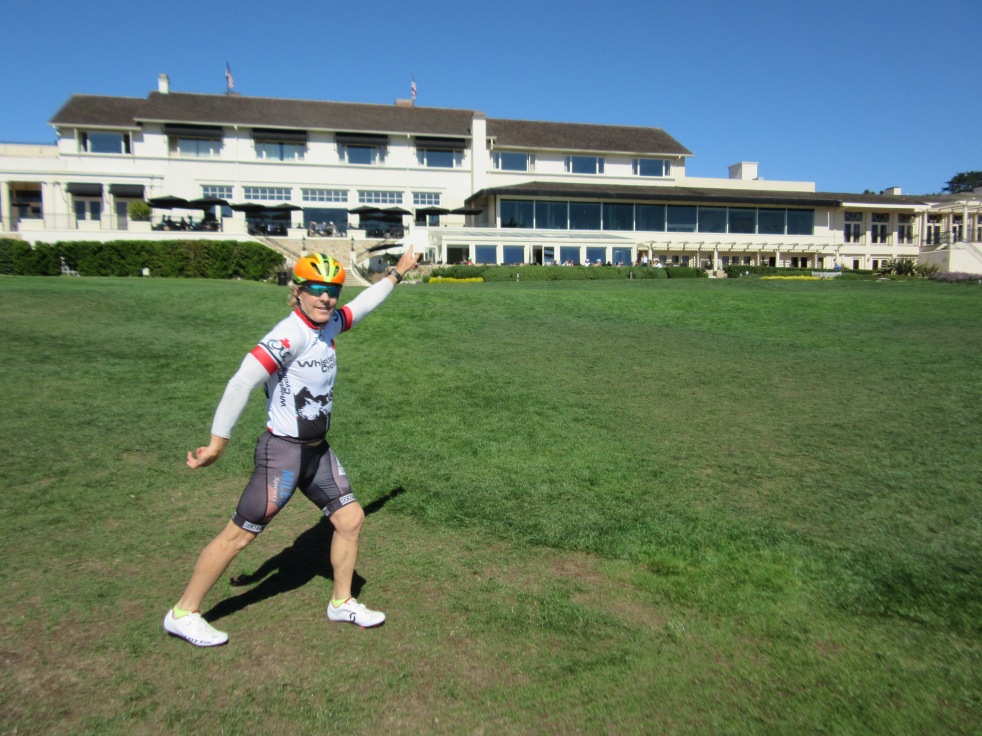 Oct. 9- Big Sur Campground to Lucia.  Brian Smallwood and me, with sag wagon services provided by Emily and Aaron, who caught up with us at Big Sur Bakery, five miles south of Big Sur.

Slept at Chuck and Fran’s in San Simeon.

Oct. 10- San Simeon to Avila Beach.  Brian Smallwood and me. Emily and Aaron provided sag services again :).  We cycled to Moro Bay, where Aaron was surfing and Emily was running on the beach.

Aaron and Brian in Morro Bay

Aaron going in to surf 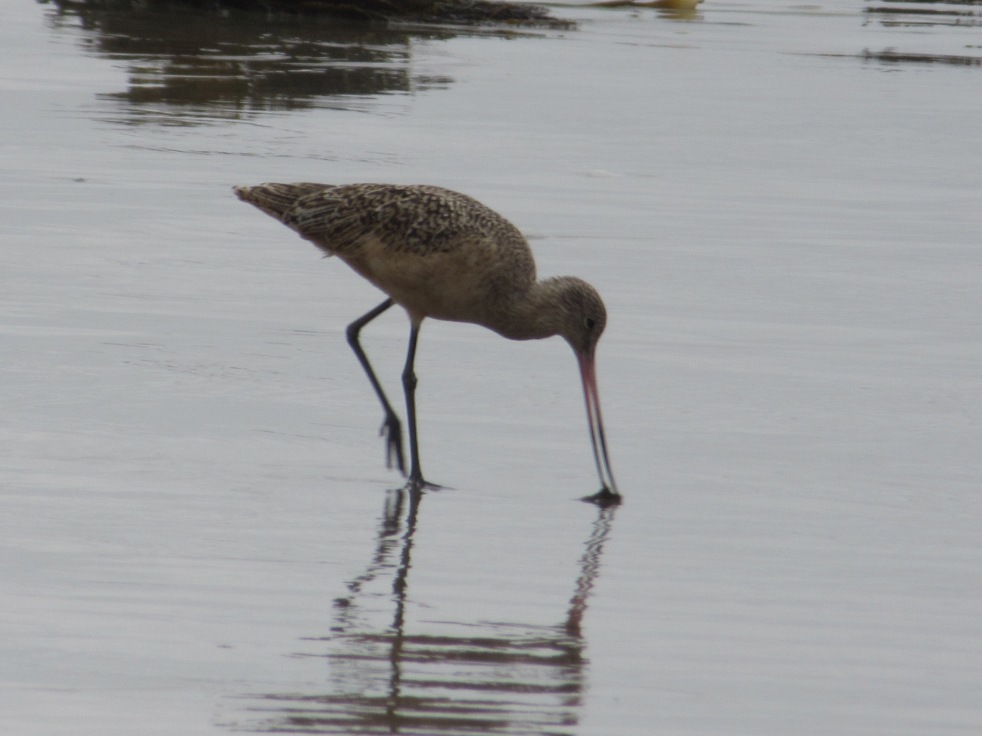 65 miles/ 1,835 total  After breakfast at Jane Smith’s home on the ocean, we rode through fields of strawberries, cabbages, yellow squash, tomatoes, more strawberries and more strawberries, grapes, lettuce, broccoli…and more…then through ranch country and into wineries before we arrived in Buellton. Had  bowl of soup at Pea Anderson’s, a beer at a lifeless bar called Sideways (because the movie “Sideways” was filmed here) and a $10.80 bad brandy old fashioned at the Marriott.  Not a great night- except the Cubs did win. 🙂

Slept at a Motel 6, which was very crowded with two bicycles in it.

Oct. 12- Buellton to Santa Barbara, CA  Brian and I

43 miles/ 1,878 total  After at omelette  at Ellen’s Pancake House, we rode almost entirely on 101 South, a busy highway with wide shoulders, to the ocean and then turned left along the beach.  Ten miles from Santa Barbara we got on a delightful bike path that took  us through the middle of the University of California Santa Barbara campus.  And the bike path was packed with student cyclists.

Taiwanese cyclists we met on the way to Santa Barbara.  He started in Anchorage, rode to Banff, down the Continental Divide trail to Glacier, on to Yellowstone, then picked up his girlfriend in Las Vegas.  They are headed for South America, and don’t plan to stop after that!

One small sample of the bicycles on the UCSB campus

Slept at the home of Joe and Laurie Sullivan, Brian’s friends. 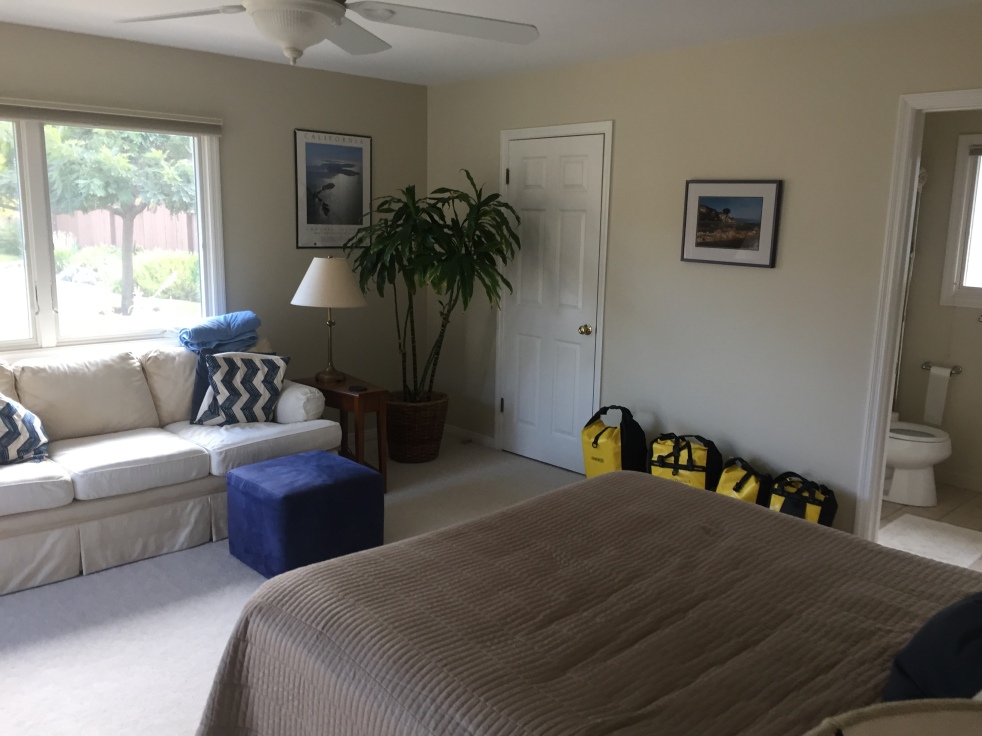 Oct. 13- Rest day.  Rode my bike to Leadbetter Beach, had lunch on the ocean with Joe Sullivan, CFO of Santa Barbara City College, and got a tour of the college.   Sat in a coffee shop downtown and wrote, toured the Mission of Santa Barbara and cycled back to Sullivan’s home.

4o miles/ 1,918 total  Brian and I, a lovely ride through the foothills of Santa Barbara and along the Pacific Ocean on fabulous bike paths and safe roads, to Ventura, where we ate dinner with Brian’s wife, Sharon, who rode in 30 minutes on a train from their home in Camarillo. 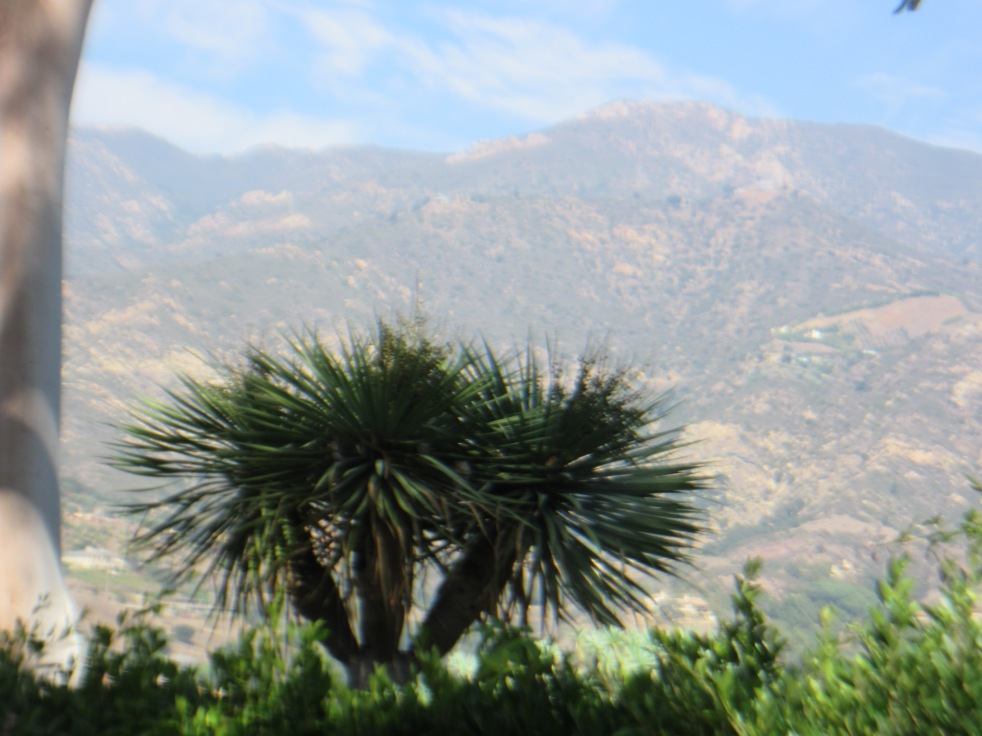 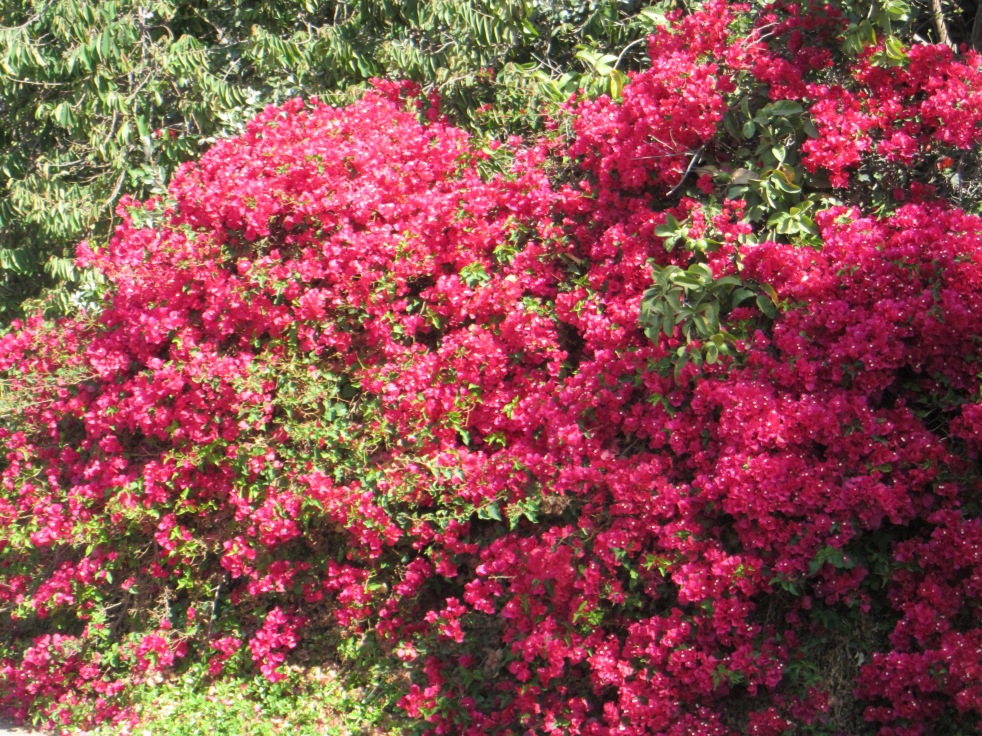 The foothills of Santa Barbara 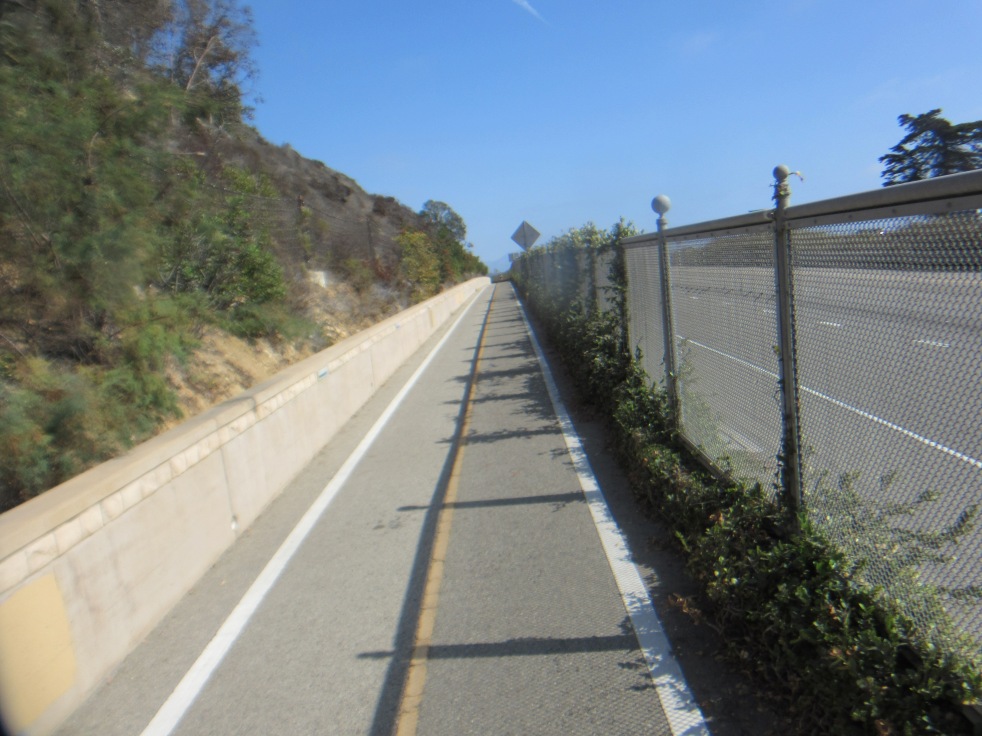 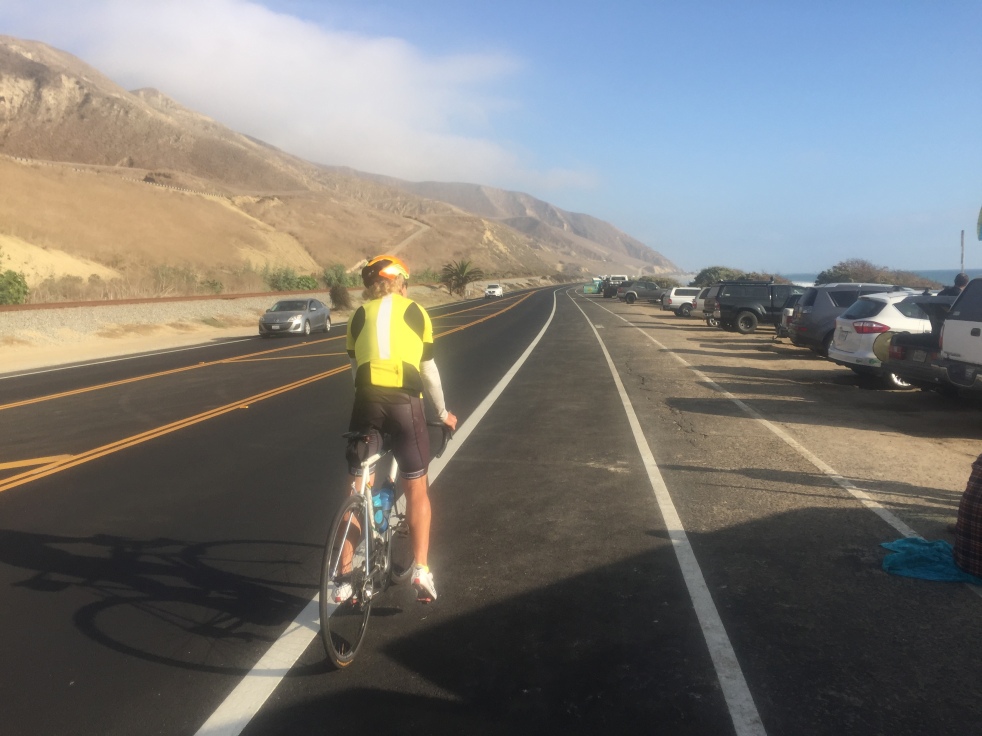 Oct. 15- Rode to the ocean and back from Brian’s house

Staying in Camarillo now for most of a week, before my Oct. 21 flight to Phoenix to be with Jenny and friends for a week, then just Jenny and me for a week!

Oct. 16- Brian’s house. Watched football and putzed.  Did not ride.

Slept in the Camarillo

Cycled toward the coast and back.

Rained- enough to dampen things- in Camarillo during the night for the first time since March!

Oct. 19- Visited  Kikki Sorrells, Peggy Sue’s sister,  in Van Nuys. Dinner with her former co-worker, Jim, overnight and hanging out at her lovely home the next day! 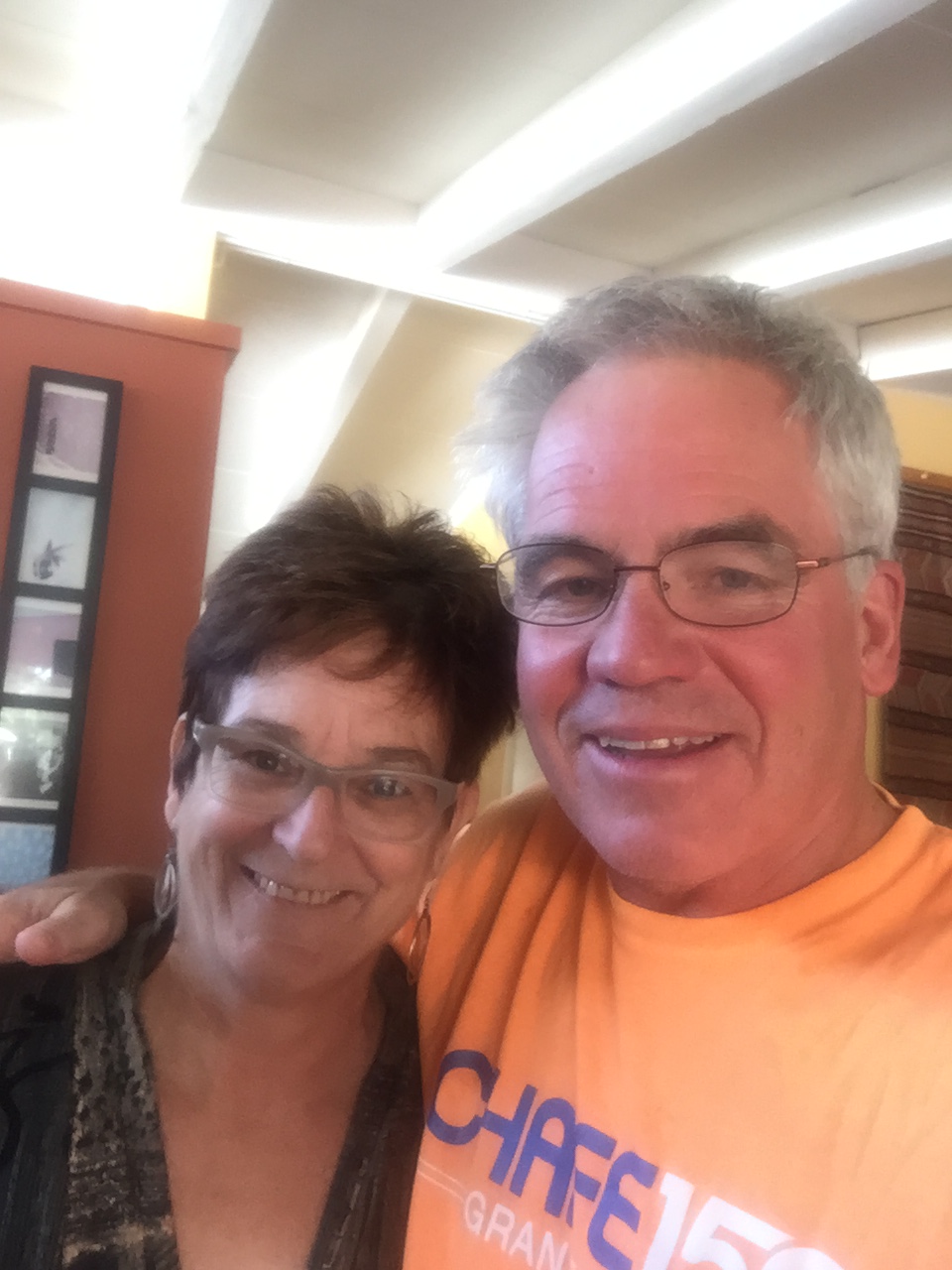 Oct. 20-  Prepared to fly to Phoenix to meet Jenny and friends!

Oct.  21- Flew to Phoenix to join the “Friends of Jenny” Arizona bike trip.

Brian and Sharon graciously drove me to LAX to catch my 11:30 a.m. flight.

Slept in Phoenix at Jenny’s niece’s home, Jan, and her husband, Andy. 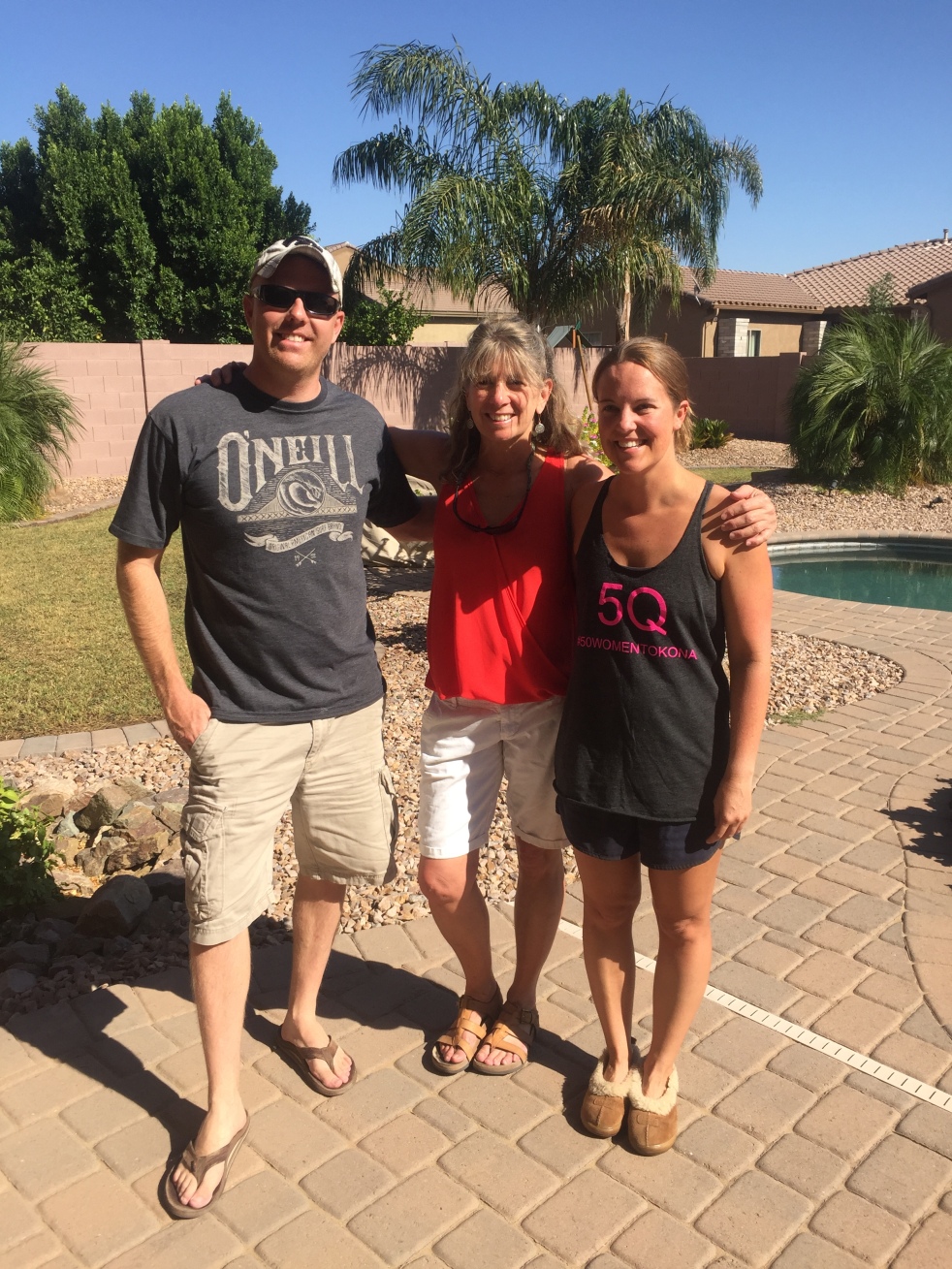 SEE ARIZONA TRIP FOR AN ACCOUNT OF THE REST OF OCTOBER!