Today, Oct. 30th, I’m in Java Love Roasting Company in Sedona, AZ,  with Jenny.  Her nine friends, from her childhood in Evanston, Illinois, headed toward their homes this morning- returning to Seattle, Kenosha, WI, Evanston, IL . We’ve been together for a week- in Phoenix, Tucson and Sedona.

Five years ago, Jenny initiated an annual bike trip with these friends.  The women say, “This is the fifth of twenty-five trips.” 🙂  Next year,  Coeur d’Alene in September.

After the Oct. 16th ride to Camarillo, CA,  I stayed at Brian and Sharon Smallwood’s home for six days.  Brian rented my home for Ironman 12 years ago and several more years since. He was in CdA for the half-Ironman this year.

One night, Brian and Sharon drove me to Van Nuys to the home of Kathy Sorrells, Peggy Sue Juergens’ sister.  I had a lovely dinner with Kathy and her colleague, Jim, and I stayed at her home much of the next day, swimming, reading and writing.

While in Camarillo, we rode to the ocean one day (22 miles round trip), took a 24 mile ride into the foothills through high-end residential areas and past acres of lemon trees.  And we boated to Santa Cruz Island, one of the Channel Islands.

Brian and Sharon drove me to LAX on Friday, Oct. 21, for a flight to Phoenix to join the Friends of Jenny (FOJ) bike trip. 🙂  Jenny and Sheryn Olson drove from Coeur d’Alene to Phoenix- in two long days.

Jenny’s sister, Sal, and I connected at the Phoenix airport-  fun to meet one of Jenny’s four siblings for the first time.  We Ubered to Jenny’s niece’s home, Jan, and her husband, Andy, and talked until Jenny and Sheryn arrived that evening.  We had dinner at a fabulous Mexican restaurant- huge and packed, with great margaritas.

Jan is a committed triathlete and arose at 4:30 a.m. to go on a training ride-super early because of the Phoenix heat and traffic.  She had completed 72 miles before we met her at 9 a.m. to share in part of her ride.

Jenny, Sheryn, Jan and I took off about 9:15 a.m., with intentions of riding about 30 miles.  After three miles,  Jenny was doubled-over on the side of the road, sick from the heat. It was over 90 degrees and Jenny  came from 45 degrees in Coeur d’Alene.  I poured water over her and we sat by the road for 20 minutes, using my body to create a little shade.

Jan and Sheryn returned to us and Jenny convinced us she could ride the eight miles home, with the pool as a motivator.  For the next couple hours we sat by the pool in Jan and Andy’s back yard.  The Phoenix heat is to be taken seriously.

Later that afternoon, we spoke to Ted, an REI salesperson, and mentioned Jenny’s experience that morning.  He gave us a TED talk. His advice: 1)  For every cup of coffee, drink a glass of water; 2) For every alcoholic drink, counter with a glass of water; 3)  Eat a significant amount of carbohydrates before exercising in the heat, because once you get hot you won’t feel like eating; 4) Heat stroke takes two to three days to recover from and you are forever more susceptible to it.  Thanks, Ted.

Tucson is a wonderful cycling town!  Smooth, wide bike paths, many roads with comfortable bike lanes and a law that cars need to give bicycles at least three feet of space. We cycled past dry washes, cacti and into Saguaro National Park, on the west and east sides of Tucson. 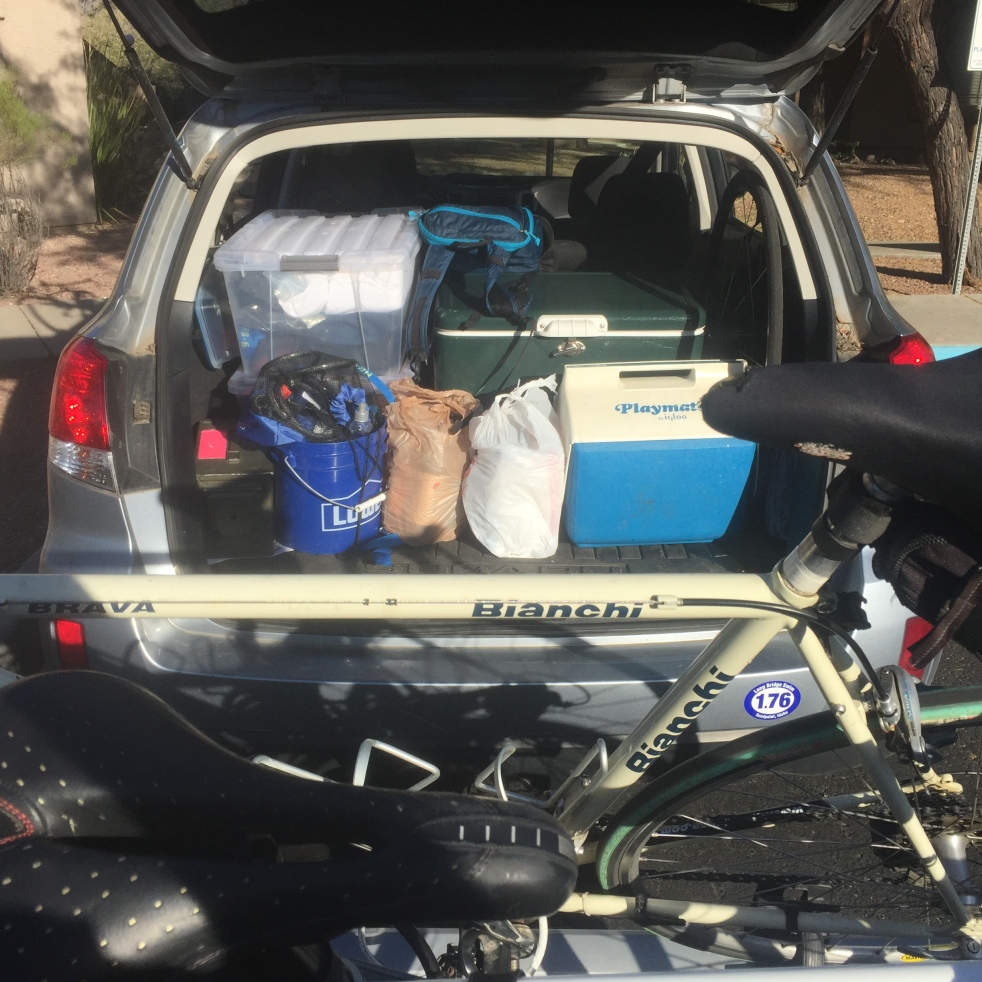 Wednesday morning we drove 250 miles from Tucson to Sedona.  We were now in red rocks country, with fewer saguro cacti and more pinyon trees, much more green vegetation and cooler air.

Before checking in at our condo, we hiked Bell Rock in  Oak Creek- five miles around a Bell Rock and Courthouse Butte. 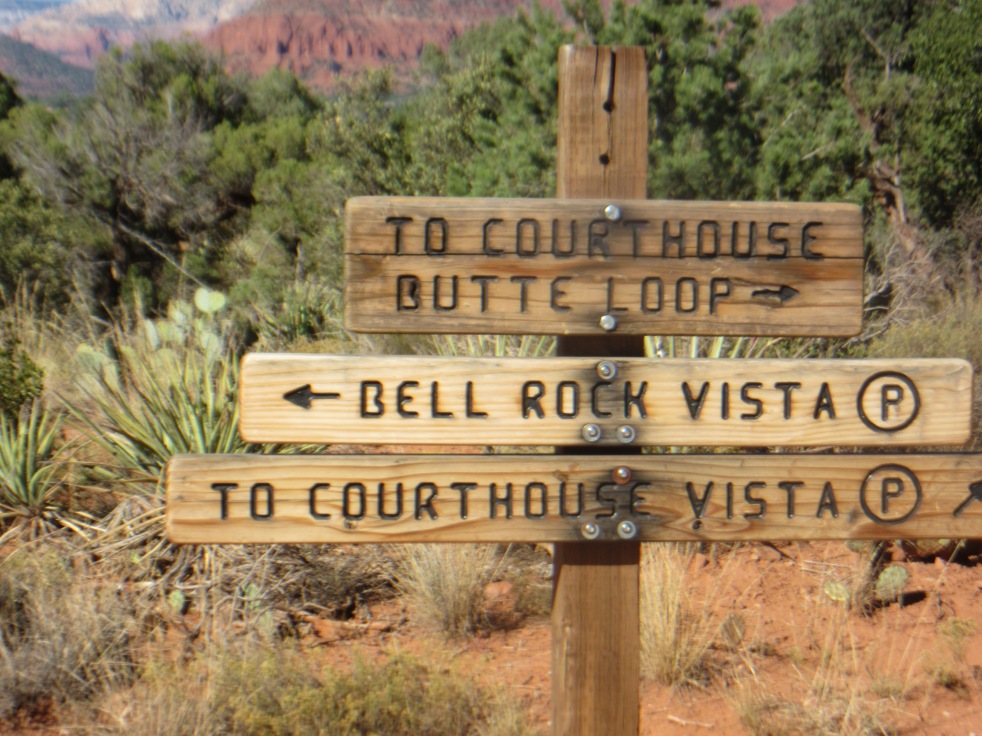 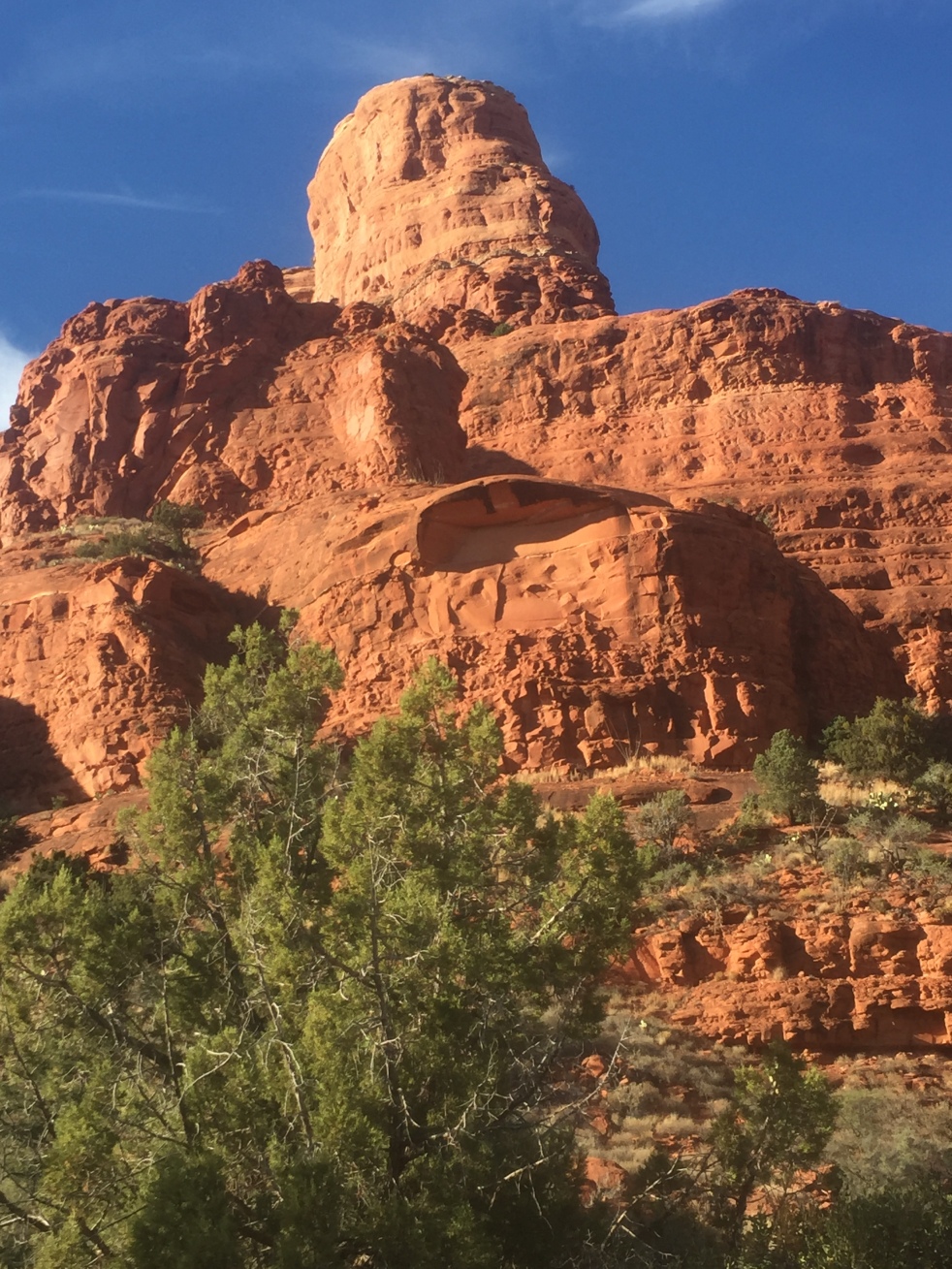 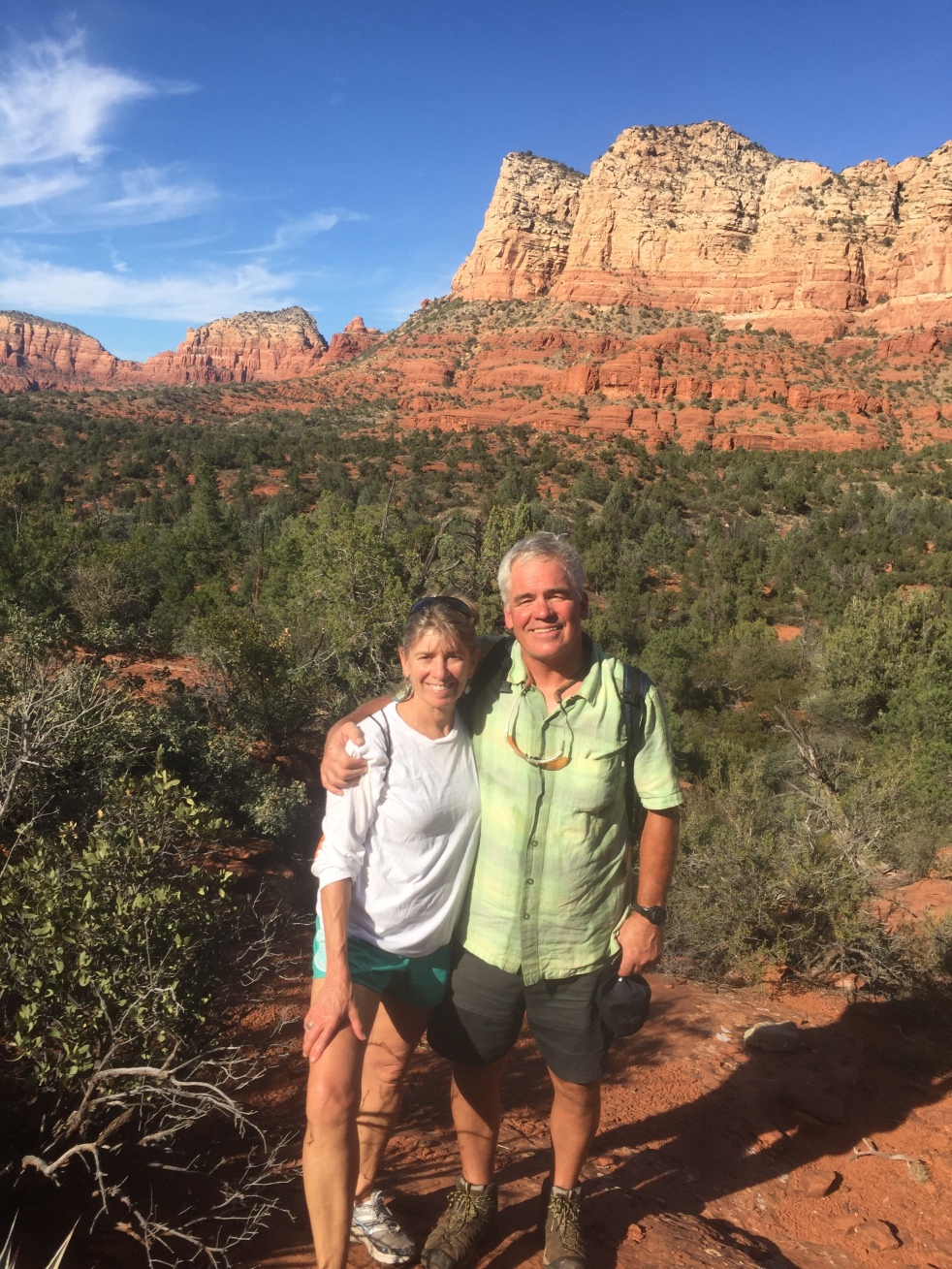 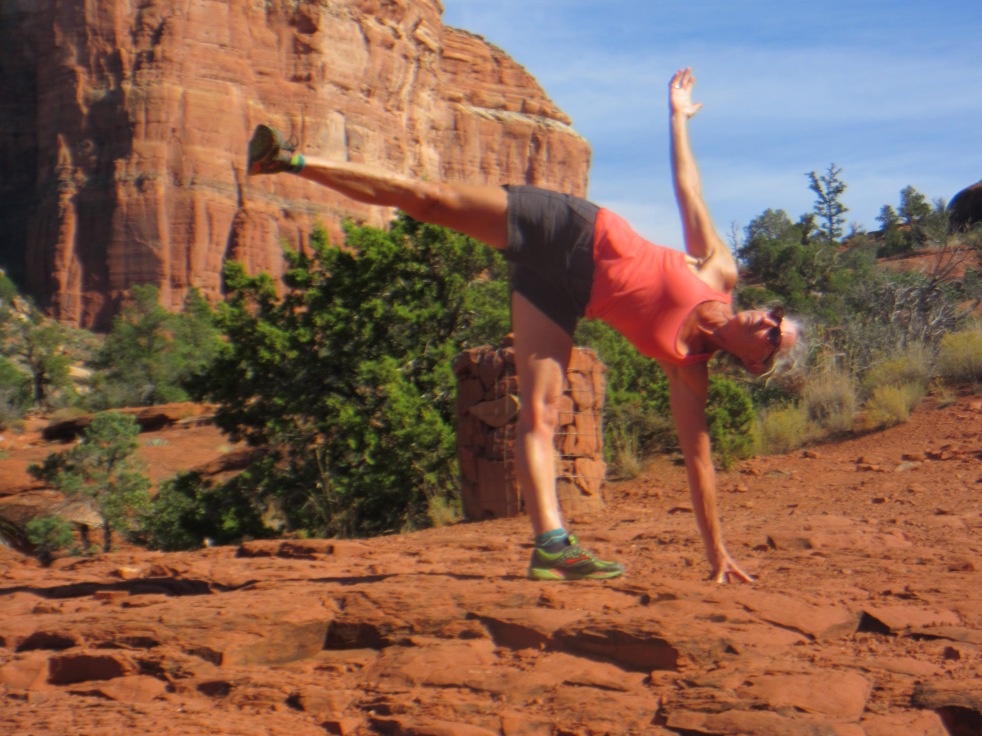 On Thursday we drove 170 miles to the Grand Canyon and cycled part of the south rim.  I last visited the Grand Canyon when I was 12, on a family vacation. I remember the first time we walked to the rim and I saw the canyon.  The feeling of awe was the same this time.

We cycled 22 miles from the Watch Tower, at the east end of the south rim, to Grand Canyon Village. The road was like a Wisconsin roller, with decent shoulders and motorists/ tourists who were not in a hurry and were considerate. In this part of Arizona there are deciduous trees and Ponderosa pines, so at times we were riding through corridors of trees- then the Grand Canyon would appear. 🙂

Our group of eleven moved along the canyon  at different paces and reconnected at the Bright Angel Lodge to load up for the drive home.  While waiting by the rim,  Senator John McCain walked by.  He was ten steps past me before I realized who it was and I missed my chance to stop and chat with him.  We made eye contact and I think I may have hurt his feelings by not acknowledging him. 🙂 I would have asked him if he was voting for Hillary- and thanked him for his service.

On Friday, Oct. 28, we cycled 24 miles from Sedona to the mountainside town of Jerome, AZ, a mining town of 15,000 turned artist/ tourist community of 450. We had a couple of drinks at the Spirit Room, listened to live music and talked with Richard, a resident since 1972 who once spent a week in Coeur d’Alene schools as a visual artist-in-resident.

One thought on “Filling in the blanks…”